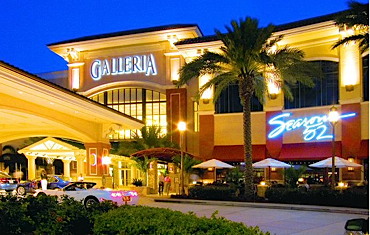 Centrally located at 2414 E. Sunrise Blvd., the Galleria Mall has been a staple in Fort Lauderdale for over three decades. But given its age, the venerable commercial center was in need of an upgrade, and shoppers everywhere will be enjoying a much fancier and more accommodating food court come this November 1st.

Formerly known as Piazza di Giorgio, the newly christened Palm Court Market will feature a large selection of unique casual eateries set amid a more aesthetically pleasing space. The upgraded court promises a sleeker and more modern look, with high-top tables, contemporary lighting fixtures, and a 16-foot-high ceiling. The newer space will be much brighter and more open than before.

Although none of the new restaurants have been named – The Galleria seems keen on keeping it a surprise for now – it has been reported that they will be operated independently, rather than by one overall manager for each food station. That should ensure a lot more variety and quality.

But a nicer and more sumptuous food court isn’t the only big change coming to the Galleria. The Fort Lauderdale mall promises to introduce a slew of new top-brand retailers, including REM French Riviera, a women’s jewelry store, and Free People, a leading purveyor of women’s apparel, accessories, and home décor. The latter has announced it will open within this week!

Other changes include various internal relocations, such as Bath & Body Works moving to the upper level near Dillard’s, Abercrombie & Fitch moving near Brookstone, and Victoria’s Secret moving and expanding into Abercrombie’s previous spot.

Developments like this are what make Fort Lauderdale such an exciting place to live. There is always something new to explore and look forward to. To learn more about the many wonderful Fort Lauderdale Homes For Sale in this vibrant area, contact The Lotus Sisters at 1.954.205.5676